Do you have a JavaScript blocker? This page requires javascript so please check your settings.

Printed dictionaries fit a great deal of information into a small space using conventions that were pioneered by Johnson’s Dictionary. This guide explains important features of Johnson’s dictionary entries as they appear in the facsimile images and in the transcribed text.

Spelling in the 18th century was more variable than modern spelling. Johnson’s Dictionary spells many words, even proper names, in more than one way. Our transcription corrects obvious typographical errors but otherwise preserves Johnson’s spelling.


Where the spelling might potentially cause confusion, you can hover your mouse over the transcribed text for a modern spelling. Note that spelling variation can also cause variation in alphabetical order (see below).


Johnson’s Dictionary includes the long “ʃ” character, a form of the letter s. Our transcription uses “s” throughout, to make reading and searching the dictionary easier for modern readers. For example, the word "diʃtinct" is transcribed as "distinct."


In the eighteenth century, the letters I and J were considered different forms of the same letter; the same with letters U and V. As a result, in Johnson’s Dictionary the word jargon comes before the word idle, and vagabond comes before ultimate.


Sometimes, Johnson links multiple headwords together to the same definition. For example, this entry contains the headwords lady-bird, lady-cow, and lady-fly. In these cases, the word is normally alphabetized by the first headword.


Sometimes, a group of words is arranged in other than alphabetical order. If you can’t find a word where you expect it on a facsimile page, look on the nearby pages.

Example of other than alphabetical order.

The headword is the word being defined. Johnson’s Dictionary lists headwords in alphabetical order, as in a modern dictionary. Sometimes these words are preceded by "to," "a," or "the," a practice that was common in the eighteenth century but does not affect the alphabetical order.

Where to find the headword


The accent mark gives information for pronouncing the word, but the mark is not part of the word’s normal spelling. When the word is used within the entry itself, the accent mark does not appear.

Unrelated words can have the same spelling. These identically spelled words are called homographs. Each homograph has its own entry in the dictionary. For example, Johnson provides two entries for two nouns that are spelled “doe.” The existence of two entries means that Johnson considered these homographs to be two different words:

By contrast, Johnson lists different senses (meanings) of the same word under the same headword. For example, the word "dog" has four different senses. The fact that all these senses are contained in the same entry means that Johnson considered "dog" to be one noun with four possible meanings, not four different nouns.


In our search results, homographs are listed separately, distinguished by their parts of speech and (soon, when multiple homographs have the same part of speech) by number. 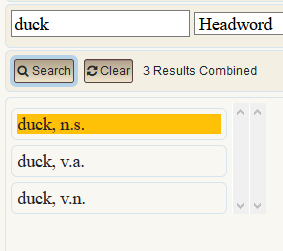 Example of homographs in result listing.

A part of speech is the label for a word’s grammatical role, such as noun, verb, etc. The labels used in the eighteenth century differ somewhat from modern labels. Here are some labels that Johnson’s Dictionary commonly uses, along with their modern equivalents (if different).

Johnson’s Dictionary typically gives a word’s etymology, or ancestry, in square brackets after the part-of-speech label. Most of Johnson’s etymologies list only an etymon (ancestor) or two. Sometimes the etymology is explained elsewhere in the entry and not in brackets.

We transcribe the Greek and Saxon letters in Johnson’s etymologies with their modern equivalents to make reading and searching easier, except that Saxon eth (Ð, ð) and thorn (Þ, þ) (which would now be spelled with two letters, “th”) have been preserved.

Example of a typical etymology.

Example of etymology elsewhere in the entry.

Our transcription does not modernize any language names.

Johnson often describes how words should be used. His usage advice sometimes is set off by square brackets but can show up anywhere in the entry.


Some of Johnson’s usage terminology had meanings that may be unfamiliar to modern readers:

generally disfavored or looked down upon

impure or unsuited to English

either rural or uneducated

undignified; not appropriate for formal writing

not supported by a respected writer

In English, inflected forms are normally easy to predict. English has comparatively few inflections and many of them are created in a regular manner: for example, we add –s or –es to nouns, -ed and –ing to verbs, -er and –est to adjectives and adverbs. When inflections are less predictable, Johnson sometimes lists them near the beginning of the entry.

Many words, particularly common words, have more than one meaning. Each of these meanings is called a sense, and Johnson, like modern lexicographers, numbers the different senses in each entry.

Occasionally in the print volumes, sense numbers appear out of order. Our transcribed text corrects errors when the intended numbering seems obvious.

Johnson’s Dictionary illustrates definitions with quotations showing the word in use. These quotations—more than 110,000 of them, drawn from respected writers in diverse fields including agriculture, religion, ship-building, literature, politics, medicine, print-making, history, chemistry, etc.—were considered one of the most valuable features of the folio editions. These quotations are indented in the transcription.

Johnson frequently edited quotations and abbreviated the names of authors and titles that he was quoting. Where possible, our online edition will soon provide complete author and title information, which can be viewed by hovering your mouse over the transcribed abbreviations.

Quotations in the entry are indented in transcription.

To save space in the print edition, Johnson avoided duplicating information. When additional information about one entry can be found in another entry, Johnson’s Dictionary provides a cross-reference to let readers know where to look for it. Our online edition will soon link cross references so that you can consult them easily.